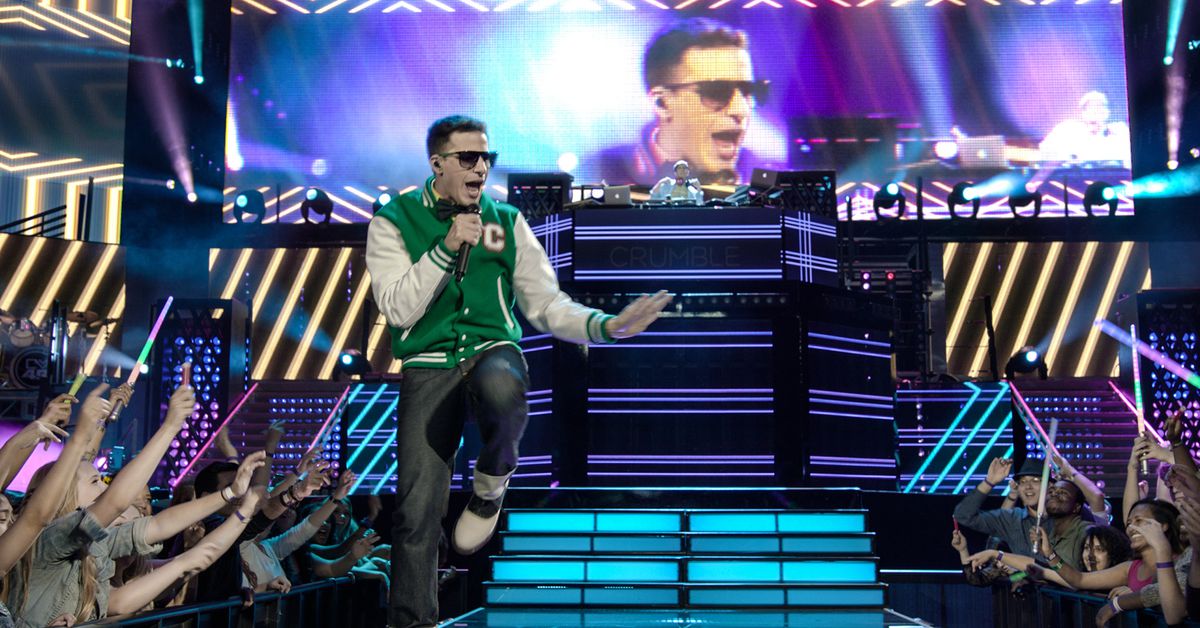 October! It’s a great time for movies. Many people spend the month watching horror (we do that kind of thing year-round), but there’s no wrong way to do it, and plenty of excellent movies new to streaming this month for your viewing pleasure.

Two of the funniest American comedies of the century, Popstar: Never Stop Never Stopping and Spy, make their triumphant returns to streaming, as does the breakout 2022 showstopper Ambulance. The masterpiece romantic comedy La Ronde swings its way over to HBO Max, while the Ocean’s trilogy lands at Netflix for those looking for heist-y good times.

That doesn’t even cover the outstanding collection of excellent ’80s horror being added to the Criterion Channel. Seriously, if you’ve been considering signing up for the service, now would be the time.

That’s not all — there are tons of great movies new to Netflix, HBO Max, Amazon Prime Video, Hulu, and other streaming platforms this October. Here are 11 of the best.

One of the very best movies of 2022 (it might be my personal favorite) has left Peacock and arrived at Prime Video, exposing a whole lot of new people to one of Michael Bay’s best movies. Bay’s tightly contained thriller is lean and mean, with captivating car chases, groundbreaking drone camera work, and a deliciously unhinged performance from Jake Gyllenhaal. —Pete Volk

Ambulance’s greatest strength is how quickly it builds tension. The plot and main characters are set up with brisk efficiency to get us to the action as quickly as possible, and the pace and pressure pile on steadily from there. The film’s structure has an inherent momentum that Bay supercharges with his relentless filmmaking energy. The middle third of the film, as the first stage of the chase and the tensions inside the ambulance reach a simultaneous climax, is truly breathless stuff. But it’s simply not possible to sustain that level of excitement over such a long running time, and the air goes out of the movie toward the end, especially after some overdeveloped plot mechanics require the ambulance to stop and start again more than once. Bay and screenwriter Chris Fedak didn’t learn Speed’s lesson: Never, ever stop rolling.

Adapted from the first book in Jeff VanderMeer’s bestselling Southern Reach trilogy, Alex Garland’s Annihilation stars Natalie Portman as Lena, a biology professor who volunteers to take part in an expedition into “The Shimmer” — an anomalous quarantined zone filled with wildlife mutated by a fallen asteroid — in search for answers to her husband’s disappearance. Along with a team of four other women including a psychologist, a physicist, a geomorphologist, and a paramedic, Lena is brought face-to-face with a form of life that threatens to irrevocably alter everything she knows to be human.

With an exquisite cast of performances, vivid special effects, a brilliant score by composer Ben Salisbury and Portishead’s Geoff Barrow, and a remarkable finale, Annihilation is a sci-fi meditation on the terrifying potential of nature and the cycle between self-destruction and renewal. —Toussaint Egan

Annihilation is streaming on Paramount Plus Oct. 1.

Craig Gillespie’s 2011 remake of Fright Night stars Anton Yelchin as Charley, a nerdy teenager living in a suburb on the outskirts of Las Vegas with his single mom, Jane (Toni Collette). When Jerry (Colin Farrell), a handsome and brooding stranger, moves in next door, Charley soon learns that his new neighbor is in fact a vampire on a rampage and killing people all around town. Enlisting the aid of Peter Vincent (David Tennant), a flamboyant Vegas Strip magician with an interest in the occult, and his girlfriend, Amy (Imogen Poots), Charley is forced to face off with Jerry and his sired underlings in a desperate bid to save his town. Farrell delivers a fantastic and unsettling performance as Jerry, and the late Anton Yelchin is as charismatic in his turn as the film’s leading man. —TE

Max Ophüls’ 1950 masterpiece is one of the finest musicals, comedies, and romance movies ever made. The incomparable Anton Walbrook is your master of ceremonies, taking the audience on a carousel journey of love, bouncing from one romantic to another in a dizzying array of romantic connections. It’s a joyous and infectious anthology story, the likes of which we haven’t seen since. It’s been on the Criterion Channel for a while now, and I’m overjoyed more people will now get a chance to see one of my favorite movies ever made. —PV

Steven Soderbergh’s Ocean’s movies are a lot of things: great hangout movies with a terrific ensemble cast, fun capers with daring heists, and laugh-out-loud funny comedies. Your mileage may vary with each installment as the successful franchise balloons, but all three are solid popcorn entertainment. —PV

The Ocean’s trilogy is streaming on Netflix Oct. 1.

There’s another Kathryn Bigelow movie coming to streaming in October (more on that later in the month), but first let’s talk about one of her biggest commercial successes: the whirling surfer heist bromance Point Break.

Keanu Reeves and Patrick Swayze are star-crossed bros, a tried-and-true narrative construct most recently seen in the also excellent RRR. In this one, Reeves is a former college football star turned undercover FBI agent (with the pitch-perfect name Johnny Utah) who is sent to investigate Swayze’s group of bank robbers. The two instantly hit it off, but their respective jobs get in the way of what would otherwise be a beautiful friendship.

Bigelow developed the script with her then-husband James Cameron, and the movie was a hit. Swayze, Reeves, and Lori Petty are all excellent in their respective roles — and the three trained intensely with a former pro surfer to pull off some of the things they have to do with this movie, leading to some incredibly memorable action sequences aided by beautiful locations in Utah, Oregon, and on California beaches. –PV

Pop icon Conner “Conner4Real” Friel steps on stage in a varsity jacket to an adoring crowd. He breaks out into the opening verse of his hit single “I’m So Humble”:

A hologram of Adam Levine pops on stage to sing a refrain. Suddenly, dozens of holograms are on stage, dancing with each other and generally being goofy. And then we cut to The Mariah Carey, reflecting on the importance of this song to her.

“I’m So Humble” — I instantly connected with that, because I’m the most humble person I know.

That’s the opening credits sequence of Lonely Island’s Popstar, one of the funniest movies of the decade and arguably the finest feature-length skit the SNL graduates have ever produced. The reliable trio of Andy Samberg, Jorma Taccone, and Akiva Schaffer (the latter two directed) play a famous former boy band group who have long since split up, with Samberg’s Conner as the only one to make a real solo career for himself. This movie’s got heart in the same way many of these comedies about adult-sized children do, but the real treat is the nonstop barrage of hilarious gags from start to finish, with pitch-perfect parody songs and a endless array of mind-blowing celebrity cameos. It’s a blast. —PV

The past decade has been a bit of a slow period for American movie comedies. Sure, there are some great comedy movies you can watch at home, but as the biggest blockbusters in the world have become more and more comedy-oriented, there’s been less space for true comedies in theaters.

This is all to say that Spy is one of the best American comedies of the century. A sendup of espionage movies from director Paul Feig (Bridesmaids, Freaks and Geeks), it stars a pitch-perfect Melissa McCarthy as a desk worker for the CIA who is forced into active duty when her partner (Jude Law) is killed by the daughter of an arms dealer (Rose Byrne, who is positively delightful in this). Add in scene-stealing turns from Jason Statham as an overconfident Bond parody, Allison Janney as McCarthy’s skeptical boss, and appearances by Bobby Cannavale, Peter Serafinowicz, and Miranda Hart, and you’ve got a rollicking good time (with terrific action shot by Day Shift director J.J. Perry). —PV

Spy is streaming on Peacock Oct. 1.

Regular Polygon readers will know this is one of my favorite movies of all time (seriously, top 10-type stuff). If you’ve delayed checking it out, now’s your chance.

As I wrote when it was added to HBO Max in July:

Universal Soldier: Day of Reckoning was an awakening for me. I had not (and still haven’t) seen any of the other movies in the franchise, and at the time I was unfamiliar with its young star, Scott Adkins. But something about John Hyams’ twisted sci-fi/horror/action story got its hooks into me and never let go.

A soldier (Scott Adkins) wakes up from a coma, haunted by memories of the brutal murder of his wife and daughter. He wants nothing more than to hunt down the man responsible… Luc Deveraux (Jean-Claude Van Damme), the protagonist from the original films of the Universal Soldier franchise. With influences from filmmakers like Gaspar Noé combined with the grimy aesthetic of a direct-to-video action-horror flick, Day of Reckoning is a unique combination of genres and talents and one of my favorite movies ever made. A note: This is a particularly violent movie, and is not for the squeamish. —PV

A weekly roundup of the best things from Polygon

Previous Story:
Stadia’s Sudden Shutdown Blindsided Personnel, Devs, And Bungie
Next Story:
Square Enix Is Drowning 2022 With RPGs, And We’re Here For It